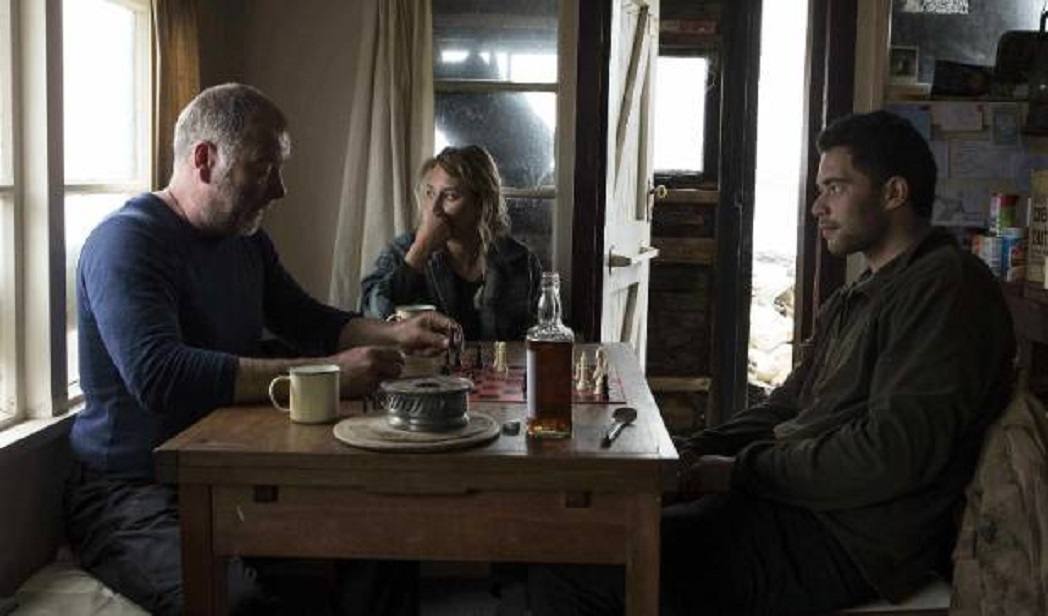 For the first 30 minutes or so, Human Traces looks to be placing itself squarely in a very respectable New Zealand film-making tradition. It is – you'll think – the one about the man alone and the women who love or can't get away from him. With the relationship brought to a spiky and usually violent crisis by the arrival of young challenger to the older man. And the first act of Human Traces conforms knowingly to type, looking for all the world like an homage to that era of New Zealand cinema when the women were all wry and tussocky Sheilas and the men were mostly Bruno Lawrence.

At a windswept and chilly photogenic sub-Antarctic island research station, Glenn and Sarah are a married couple divided by a 30-year age gap and Glenn's fading emotional stability. Glenn's insistence that he alone can rid the island of pests and predators is at odds with the survey results Sarah must radio back to their employers on the New Zealand mainland.

Into the escalating tension comes Peter, a handsome but dismayingly clueless young DOC worker who will be helping out trapping, shooting and counting the island's rats, rabbits and feral cats.

From there, just as you might think you know exactly where debut director Nic Gorman's smart and pleasantly taciturn script is heading, the story shifts and Human Traces unexpectedly doubles back on itself to become a rare and quietly precocious Rashomon; a film that recounts the same events – with new information imparted – from the perspectives of the different characters.

Human Traces is an extremely watchable local entry to be proud of. There is some assured camera (John Chrisstoffels) and soundtrack (Stephen Gallagher) work here, and a trio of strong performances to anchor the film. Sophie Henderson (Fantail), Mark Mitchinson (Siege) and Vinnie Bennett are uniformly fine in the leads. Peter Daube contributes some tough and resonant moments in a deceptively important cameo as the skipper of the boat Peter arrives on.

But what makes Human Traces work is that sly, literate and cunning script, and a sinuous and deeply intelligent contribution from Richard Shaw in the edit suite. There is some storytelling sleight of hand at work here that makes most of the Hollywood product I've seen this year look clunky and exasperatingly unambitious.

Human Traces is exactly the sort of film that I love. This is a smart, entertaining, thoughtful and mischievous film with something on its mind and the confidence and know-how to say it. Bravo. - Stuff