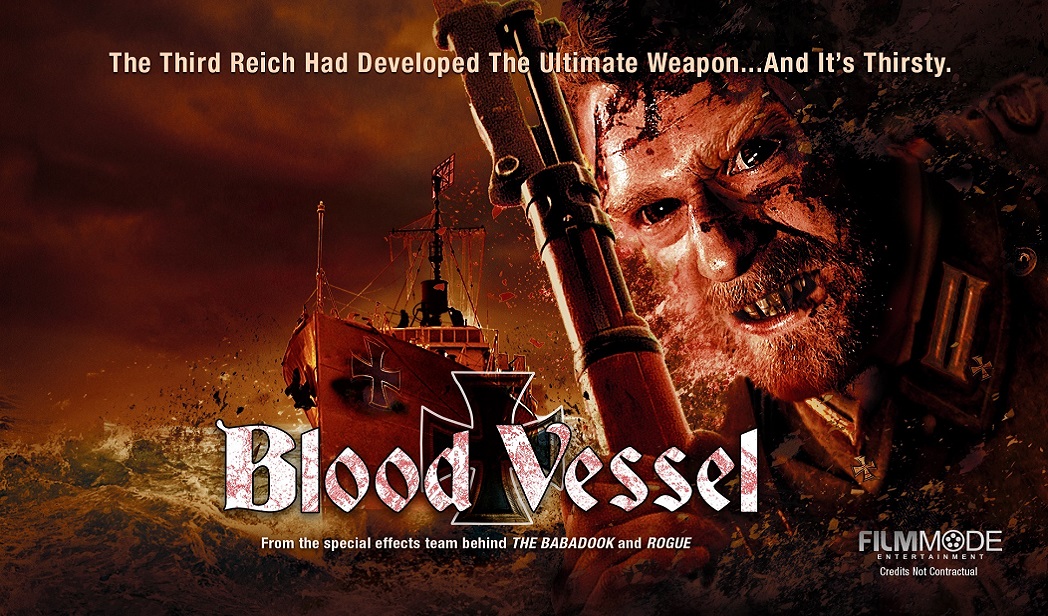 On a cold, dark and rainswept day on a dock in Williamstown, Melbourne, Australia, Justin Dix, co-writer and director of BLOOD VESSEL, is moving quickly. We’d just departed the HMAS Castlemaine, which was built for the Australian Navy and saw action during WWII, but now serves largely as a museum and is being used as BLOOD VESSEL’s principal set and location. We’re heading for a large open tent on the shore that at that moment is unfortunately flapping in the wind; fortunately, Dix is in good spirits, and the award-winning special effects artist (THE BABADOOK, THE LOVED ONES) is keen to discuss his directorial follow-up to 2012’s CRAWLSPACE—beginning with the title.

“At first, I thought it was like ROBOCOP, with the title being way too blatant. Back then with ROBOCOP, they said, ‘We’ll come up with a better title,’ but they didn’t, and ROBOCOP stuck. The same with this—I thought that if anyone came up with something better, we’d use it. But no one did, and I now love BLOOD VESSEL. I’m actually surprised no one has come up with that title before. It’s perfect for this type of movie, which is vampires on a ship. But no one had used it for any sort of film previously, which was great.”

BLOOD VESSEL, which premiered at the recent Cannes Film Festival market, stars Nathan Phillips (WOLF CREEK, SNAKES ON A PLANE), Christopher Kirby, Australian veteran Robert Taylor (THE MEG, THE MATRIX), Alyssa Sutherland and John Lloyd Fillingham, and was scripted by Dix and Jordan Prosser. The official synopsis from sales agent Film Mode Entertainment goes as follows: “BLOOD VESSEL takes place somewhere in the North Atlantic, in 1945. Barely surviving on a life raft in the middle of the Atlantic, they are forced to seek rescue from a passing Nazi ship. Once aboard, they discover the ship to be abandoned, with signs of a bloody struggle. As they investigate further, they discover pillaged Romanian artifacts and an enemy far deadlier than those they faced on the battlefront.”

“I actually wrote this when I was stuck in a contract with Fox International for the [unmade] film DECLASSIFIED, which kept me out of things for a year while they developed it. I couldn’t really take on any other work, so I thought I’d write something else very similar to DECLASSIFIED, which was ghosts on a submarine, and that I’d make the new script about vampires on a ship. It’s the Robert Rodriguez thing where you use what’s available to you. Our office is a stone’s throw from the Castlemaine, so everything is close at hand. When I finished the script for BLOOD VESSEL and was getting it to actors, they noticed that it demonstrated an exceptionally good knowledge of the ship’s layout.”

Despite that advantage, and the limited location, Dix says, “BLOOD VESSEL feels like a much bigger and more daunting movie than CRAWLSPACE, and I don’t know why. The environment, as much as I thought it was going to be logistically simple, isn’t [laughs]. There’s only one entrance to all of the locations, and that’s only via a ladder. Yesterday, when we had all the artifacts and coffins lined up in the cargo hold, it looked amazing. A lot of it is set decoration, but to build the hold itself, with all the brass fittings, would have been very expensive even before we dressed it. On CRAWLSPACE, we built all the sets, but the advantage of this is that we can put cameras anywhere. The guys who look after the ship and the museum have been amazing, and allowed us to film all over it. I don’t even know what is our stuff and what is theirs: ‘Do we have a block and tackle? No? OK, then let’s use that one.’”

Dix has wanted to utilize the Castlemaine, packed with all sorts of floating hardware, in a film for years; he was reminded of it every time he drove to his nearby Wicked of Oz Studios. One issue involving its use here, however, is that BLOOD VESSEL will live up to its moniker. “When I first met with the committee that now runs the Castlemaine, who are all very retired, I told these elderly gentlemen, “Firstly, this film we’re making isn’t going to be your sort of movie. Your ship is a museum, and we’re going to make it look like shit. We’re going to dirty the walls and make it dark, dingy and misty. It won’t be inviting, basically.” I did say that we’d clean up afterwards, and also that they may even get some movie aficionados coming to visit the ship after BLOOD VESSEL is released, and they’ll be disappointed because it’s only a museum. The committee all went, ‘Aaah…really?’ However, they seem very keen to get some positive press out of it. Like most location owners, though, I’m pretty sure they’ll be glad to see the end of us [laughs]."

When it comes to describing the vampires that make all that mess, Dix prefers to simply say, “You’ve never seen anything like them.” He does note that they’ve received an unusual amount of attention from himself and his effects cohorts. “We’ve been working on our Matriarch and especially our Patriarch makeups for a long time, about six months, which is definitely longer than we normally do. We’ve been refining the sculpt over and over. Luke Polti, the head of creature and prosthetics makeup for Wicked of Oz, and I have been going, ‘Ears are too small. Ears are too big. Face is too small.’ Well, not exactly, but basically Luke resculpted it at least five times until we were fully happy with it. I kept going for bigger ears until I said, ‘You know what? Think Tim Curry’s horns from LEGEND.'

“One time, I have to admit, when we saw the silicon without the prosthetics on Troy Larkin, who plays the Patriarch, I said, ‘Damn, we did make it too big.’ However, when you see him with all the prosthetics, proper makeup and all the costuming and the framing, it strikes an amazing silhouette. The one thing our production has relied on is that our vampires aren’t schlocky.” We’re hoping to get a better look the Patriarch, the Matriarch and their “family” as BLOOD VESSEL cruises closer to release!